This tour started September 2014 in the tropical lowlands at Santa Cruz, and over the next 15 days slowly climbs the Andes from around 1,400 to 15,500 feet. In this time, we experienced a wide range of habitats, birds and some of the most spectacular scenery on earth.

September 16th–From the Netherlands to Santa Cruz, Bolivia: Our journey started around the Viru Viru International Airport in Santa Cruz.Santa Cruz is the second largest city in Bolivia, and lies 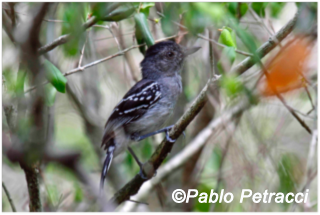 in the transitional zone between the seasonal marshes and Chaco desert to the east, the southern edge of the Amazonian rainforest to the north, scrub and grasslands to the south and the foothills of the Andes to the west. The groupmembers are experienced birders. Having traveled to various countries in South America they wanted to see a list of “lifers” very personalized, which we should strive in the pursuit of each. We immediately set to work in the Savannahs surroundings of the Viru Viru, International Airport. Here we delighted to see Greater Rhea, Turkey Vulture, Roadside Hawk, Southern Crested Caracara, Southern Lapwing, Blue-crowned Parakeet, Guira Cuckoo, Burrowing Owl, Rufous Hornero, Vermilion and Crowned Slaty Flycatchers. Then we left to the “Jardín Botánico” (Botanical Garden), located 10 kilometers east from the city of Santa Cruz. The Santa Cruz Botanical Gardens is easy access to the Chiquitano Dry Forest bird community including the Bolivian SpecialtyBolivian Slaty-Antshrike. The Botanical Gardens is an isolated fragment of Chiquitano dry forest with some patches of what the botanists call Chiquitano/Chaqueño transitional forest. The area also has a small marsh and borders on agricultural fields and pastures and Chaco influenced scrub. Highlights in the forest included Bolivian Slaty- Antshrike, Boat-billed Heron, Black-banded Woodcreeper and Fawn-breasted Wren.

September 17th-Lomas de Arena and Los Volcanes (Amboró National Park): This morning was spent at Lomas de Arena provincial reserve, initially preserved because of a small lake between sand dunes that can give the impression of having a beach. Several types of habitats are preserved in the area: savannahs, dry forest, marshes and large water bodies. The area is also a stopover and wintering ground for many Austral and Boreal migrants.

The goal was to try to find the Hudsonian Godwit, the Red-winged Tinamou and the Red-legged Seriema, three lifers needed by Jan and Helena. The first was saw in a small wetland in company of a small group of Lesser and Greater Yellowlegs between the dunes, just one individual in winter plumage, we were very lucky because the time of year, and certainly was an overwinter individual. The second only was heard in the grasslands many times. Also, inthe access drivewaywe couldobservetwo Red-legged Seriemas, the emblem of the park. Before leaving Santa Cruz, we went to a local restaurant for lunch to try some typical meals of Bolivia. 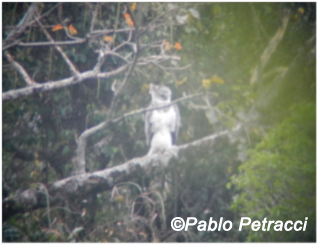 On the afternoon of September 18th, Jan spotted a bright spot among the vegetation far away in a deep valley between the mountains. A quick look through the telescope confirmed what no one would have suspected a Harpy Eagle!! This is the first record for the area: Species is very rare in Bolivia. We coudn`t be more luckly!

September 20th– Los Volcanes to Comarapa: We leave our lodge at Los Volcanes early in the morning, and drove west, to explore and bird the Samaipata area before continuing for another 97 kilometers to reach Comarapa before the end of the day. Having emerged triumphant from the depths of Los Volcanes we headed Samaipata for Lunch. On the way we made several stops looking for different lifers. We picked up many of the delightful birds of the dry valleys included Darwin´s Nothura, Least Grebe, Speckled Chachalaca, Variable Hawk, Blue-crowned Parakeet, Cream Back Woodpecker, Bolivian Earthcreeper, Sooty Fronted Spinetail, Varible Antshrike, White-throated Tyrannulet, White-tipped Plantcutter, Gray-crested Finch, Ringed Warbling Finch, Black-capped Warbling Finch, Bolivian Warbling Finch Ultramarine Grosbeak and Greyish and Golden-billed Saltator.The most spectacular endemic is the Red-fronted Macaw, and finding it was a priority for us. Also endemic to this region are the Cliff Parakeet (quite different from, yet still considered conspecific with, the more southerly Monk Parakeet). Both were seen very close. Night in Comarapa.

September 22nd-Comarapa to Cochabamba: Above the town of Comarapa is a patch of cloud forest in the Serranía de Siberia—though it is never really as cold as its namesake. At elevations above 2,440 meters, the abundance of epiphytes and purple flowers of the Family Melastomaceae will amuse us as we enter Siberia Forest then we drove on to Cochabamba making roadside stops. 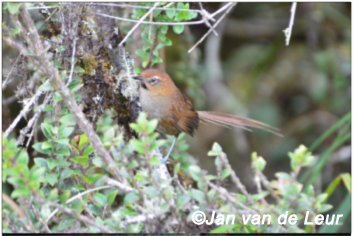 This morning we leave Cochabamba at 8,400 feet to climb to the puna ridge at 12,000 feet before dropping back down to rich montane temperate forest. This is the Villa Tunari road, known to be one of the best birding sites in South America. In Villa Tunari we dropped some 10,500 feet from the pass. At the foot of the Andes, 1,475 feet above sea level, Villa Tunari is in one of the wettest areas of sub-tropical forest on the continent. We’ll be based here for two nights to explore this part of the forest which harbors a number of Amazonian species. Our simple but delightful hotel is on the edge of an Andean river, with a view of the mountains. Highlights: White Hawk, Dusky-headed Parakeet, White-tipped Swift, Gray-breasted Sabrewing, Giant Hummingbird, Common Miner, the endemic 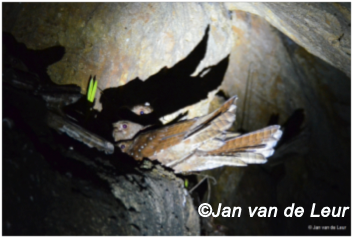 Black-throated Thistletail, Large Elaenia, Andean Negrito, Variegated Flycatcher, Green Jay, White-banded Swallow, Rufous-crowned Greenelt, Swainson´s Trush, Orange headed Tanager, Bay-headed Tanager, Amazonian Umbrellabird, Green-winged Saltator, Blue Dacnis and Chestnut bellied Seedeater. The last day after breakfast, a haft hour’s drive takes us to a river crossing and Carrasco National Park. Our goal here it a cave with the southernmost population of Oilbirds. The river crossing is an adventure in itself. In a safe but thrilling procedure, a little cable car is pulled across over the rushing river below. After having successfully reach the caves inhabited by these birds we return to the route to Cochabamba. Nights in Cochabamba.

September 27th-Cochabamba to La Paz: We leaved Cochabamba early in the morning to begin our journey to Oruro and on to La Paz, making a few roadside stops. The road climbs to a puna grassland covered pass from here, where the red-rock canyons off the road harbor. The pass lowers into the Bolivian altiplano. This rolling tableland stretches between the western and eastern cordilleras. Oruro is built on the slopes of a hill at 12,150 feet. We didn’t spend much time here, but we make a quick stop just south of town to bird the rich avian delights at Lake Uru-Uru. An ancient inland sea once covered Lake Uru-Uru as well as Titicaca. Today, the two lakes are only connected in wet years by the Desaguardero River. Uru-Uru has extensive shallow shores with teeming waterfowl, shorebirds, marshbirds and waders. The wetlands around Oruro, principally Lake Uru Uru, we superb and we saw the three species of flamingos (James´, Andean and Chilean), Andean Negrito, Andean Avocet, Andean Lapwing, Crested Duck, Puna Teal, Puna Ibis, Andean Ibis, Andean Goose and many boreal shorebirds. Among the landbirds the highlights included a Mountain Parakeet. In the afternoon we continue our long journey to La Paz.

September 28th-La Cumbre Pass and Coroico road: After an early breakfast, we drove down to Coroico in the Yungas (cloudforest) from La Paz. At the beginning we climb through the clouds to La Cumbre Pass at over 4,570 meters. Snowcapped peaks and snowfields will surround us. Natural Puna gardens attract a variety of hummers including Andean Hillstar. This delightful jewel is well adapted to the high altitude with its abilities to go into a dormant torpor to save energy at night and on cold days. From this point, we will drop more than 3,380 meters in less than 80 kilometers, passing through Puna, Andean lakes, cloud forest and finally the exuberant rainforests of the Yungas. We planned to go to the Coroico road, but the road was close off by a landslide, so we missed a lot of species here. Highlights: Baird´s Sandpiper, Andean Hillstar, Black hooded Sunbeam, Wedge, Black-throated Thistletail, Puna Canastero, Diademed Tapaculo, Mountain Wren, White-browed Conebill, Blue-backed Conebill, White-winged Diuca Finch. 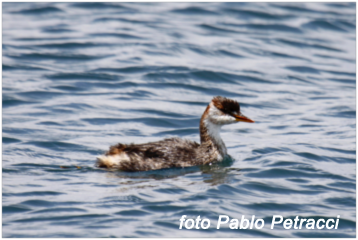 September 29th-Lake Titicaca and Sorata: Our last day of the tour was spent in the Lake Titicaca and the road to Sorata. On this road we go for two of our main targets: Berlepsch´s Canastero and Bolivian Spinetail, after several failed attempts, we could see both species! The Lake Titicaca is the last stretch of an ancient inland sea that once covered over 38,600 square miles and included Lake Uru-Uru. It is the world’s highest navigable lake, and stretches over 3,140 square miles. Its greatest known depth is 918 feet. Floating totora reeds enable descendants of the Uru Indians to maintain floating villages, and inhabitants of the south use them to build the distinctive reed boats the lake is known for. At Titicaca we quickly saw our main target of the trip-the endemic and flightless grebe (Titicaca grebe)- and it came accompanied by Black Siskins, Wren-like Rushbird, White-tufted Grebe, Andean Duck, Andean and Giant Coot, Black-throated Flowepiercer, plumbeous Sierra Finch and Yellow-winged Blackbirds. Our journey ends with an amazing lunch on the shore of the Titicaca Lake.

Bolivia proved once again that is one of the most beautiful places on the planet, not only for their birds but also for its landscapes and its people.