A birdwatching tour to Bhutan is an unforgettable and stunning experience. In Autumn and Winter we see not only the normal special birds of Bhutan, but also wintering guests from the highest Himalayen mountains are to be seen, such as wall creeper, Fire-tailes Myzornis, different species of Alpine accentors and the most stunning and wished bird: the black-necked crane. During this time of the year we see many bird species, such as the forktails, more than once. The fulvettas and laughing thrushes like many other species as well. The chance to see the most rare species in Winter is better, we mention the white bellied heron. This stunning and beautiful combination of Kaziranga and Bhutan tour gives you the best chance to see stork-billed kingfisher, whitebackes vulture, greater and lesser adjutant, but also Indian rhino, waterbuffalo, Indian Elephant and deer. There is a good chance to spot a tiger or a sloth bear. For the birds of Kaziranga we mention great hornbill, dark-rumped swift, Alexandrine parakeet, bar-headed goose, etc.

Kaziranga is a riverplain with wooded area, wetlands with reed, lakes and ponds. This is the habitat of many mammals and birds. Wild Indian elephants are quite common here, just like the waterbuffalos and Indian rhino. After years of threat the rhino is getting more and more numerous. 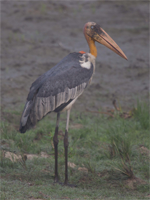 In the open areas and lakes otters and deer prevail regularly, especially moorsh deer, which are in other areas more or less disappeared. We see here many waders because of the water, egrets, whitebreasted kingfisher, kingfishers, pied kingfisher, stork-billed kingfisher. Wintering Indian geese and greyleg geese. Open-bill stork, lesser and greater adjutant prevail generally in this area. In the woods and open area we will see ring-necked parakeet and Alexandrine parakeet as well. Sometimes we see great-pied hornbill. Above the plains we will see vultures, rare in India nowadays, and marsh harrier and black eagle.

In Bhutan nature and culture has always been protected by the isolated situation and the Buddhism religion in the country. Because of the very high mountains, deep valleys and the jungle which is very difficult to encounter, the original nature is very well preserved. Bhutan is situated in the easternmost part of the Himalayas and the country is one of the most important biodiversity hotspots on earth. Nowadays 70% of the country is covered with woods, and an important part of these forests are pristine. And a quarter part of the country is protected in national parks and reservations, which are connected with corridors. Bhutan has such a variaty in ecosystems and habitats and consequently an enormous richness in species of birds, mammals and plants. In 1970 when Bhutan opened the borders for foreigners the government took measurements to control and deminish the stream of tourists in order to protect nature.

Everywhere we see birds and many birds and we see many very special species of birds. We mention the species of the high Himalayas, pheasants, the Himalayan monal and the bloodpheasant. We have a good chance to see otters, hunting and playing in the rivers and very rare birds, the white bellied herron, Pallas’ Fisheagle and the crested kingfisher.

The number of spotted birds in Bhutan was in latest tours 286 in Spring and 272 (December 2014) during the Winterperiod.