The region of Extremadura is situated extremely far away from the government in Madrid and that is why it is called Extremadura. This region, which is as large as Switzerland, is extraordinary in many ways: formerly it was known for the extreme poverty of its inhabitants and nowadays it is extremely rich in nature including birds, insects and plants. This richness is due to the variation in landscapes: the steppe area, rivers and streams, mountains in the northern region, and a landscape of holm oaks and cork oaks. Great and little bustard, imperial eagle, stone curlew, grey kite, black vulture, lesser kestrel and the great-spotted cuckoo are species easy to find here.

Extremadura is one of the best areas for watching raptors in Europe. The booted eagle and short-toed eagle are common species and the imperial and golden eagles prevail in great numbers. Most rare of the raptors is bonneli’s eagle. The three species of vultures : Egyptian vulture, black vulture and griffon vulture may be found throughout the area and the black vulture has its best breeding area here. The lesser kestrel, a threatened species which feeds on big insects, is easy to find in open areas and they are now breeding in towns as well, for instance in the old cathedral of Trujillo. The black-winged kite was new to Europe, but this bird has now become fairly common in Extremadura.

Courtship of the great bustards 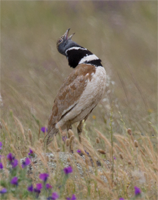 Vast grassy steppes, interspersed with uncultivated land and corn fields; peace and quiet with many big insects – this is what a great bustard needs. With its weight of 15 kg, the great bustard is the heaviest flying land bird in the world and its courtship is spectacular. On this special bird-watching tour we will have a good chance of witnessing this courtship. Other special species in this area are: little bustard, stone curlew, black-winged kite, pin-tailed sandgrouse and black-bellied sandgrouse, great spotted cuckoo, pratincole and larks ( crested lark, lesser short-toad lark, calandra lark and thekla lark).

In this landscape every four years the oaks are pruned down, and branches and leaves are used as cattle food while acorns are given to the pigs. Think of the famous Iberian ham. Every few years farmers cultivate grain and, during the intervening years, they let the land lie fallow while they rear cattle here. This kind of landscape has such a great variety that you see many kinds of biotops and a continuous variation in bird life. In this landscape many birds which are very special to us are numerous or easy to see: hoopoe, roller, azure-winged magpie, black-eared wheatear, bee-eater, woodchat shrike, subalpine warbler and spotless starling.

Areas to be visited

Monfrague is the most striking nature park in the Extremadura. The landscape consists of weathered rock formations, a large portion of the original dehesa-landscape, a culture of cork oak and the remains of former forest. We will visit a steep, spectacular rock – the Penafalcon- from where you will have a perfect view onto the river Taag. On this rock you will find a unique group of breeding griffon vultures, peregrines, black storks and eagle owl. Other birds to see are: black-eared wheatear, red rumped swallow, alpine swift, rock bunting, blue rock thrush and spotless starling, which are prey for peregrines.

Campo Aranuelo consists of a large sand and clay plain at the southern bank of the river Tietar. Here there are many rivers, streams and ponds where cattle drink. The landscape is diversified with its dehesas, grassy steppes and corn fields. It is an important area for colonies of night heron, cattle egret, little egret and black and white stork. Also, many raptors live in this area; for example, the elegant black-winged kite can often be seen flying above its habitat searching for food.

Sierra de Gredos is a mountain range of 115 km length with an average height of 500 m and a maximum height of 2592 meter (mount Almenzon). The rocks consists of granite, gneiss and slate formed in the Siluur period.

In the southern part of this reservation, where the steep slopes descend to the Tietar-valley, you will find many waterfalls and lush mountains. In the central part of this reserve you find mainly forests of maritime pines, whereas in the northern forests it is mainly the Scotch fir which prevails. In some places you can find the remains of the former large woods of cork oak and sweet chestnut. On the higher slopes many mountain flowers are found: gentian, daffodils, peonies and genista. During the month of May the most of the area is coloured yellow by the flowering alpine anemone. (pulsatilla alpina). This is in stark conrast with the southern slopes which are full of mediterranean lavender, oak and olive trees. This park is well-known for its rich wildlife , especially the Spanish ibex which flourishes here. From the Plataforma at 1800 meters we can watch these ibexes. The Sierra de Gredos is important for species such as: black vulture, griffon vulture, imperial eagle, golden eagle, booted eagle, blue rock thrush, rock thrush, chough and alpine accentor. You will also see the fire crest, cross bill, rock bunting and black wheatear.

This is a large reservoir created by the damming of the river Taag. The surrounding land consists of dry grasslands, scrub of Cistus Ladanifer dehesa and olive yards; there is also a good deal of sheep grazing. Some tens of pairs of black storks and more than 160 pairs of white storks breed here alongside numerous booted eagles, Montagu’s herrier, lesser kestrels, black kites, stone curlows and great bustards. 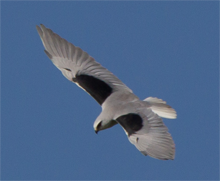 The area of Trujillo is a large, rolling landscape with some rocks, grassland, dehesas with mainly Quercus rotundifolia, cultured areas with corn and garrigue areas with lavender. This area is rich in raptors: black-winged kite, booted eagle, short-toed eagle and 100 pairs of Montagu’s harrier, lesser kestrel and many storks. Around Trujillo you will see mainly steppe land with large numbers of steppe birds such as great bustards. We will see little bustards too, as well as pintailed sandgrouse, roller and many other birds.

On the map are shown  the locations of the Extremadura journey