Part of the middle stretches of the Elbe river area was for a long time the border between East and West Germany. Border areas in Europe are often the best nature reserves, because here is hardly any economic development. Despite its dykes, in its middle stretches the Elbe is a river of size. With swirls, dead riverarms, secondary channels, flood plains, river dunes and alluvial forests, it has the elements of a natural free streaming river, which have been preserved in many places. Remarkable are the large numbers of storks seeking their food in the numerous wetlands along the river. It is spectacular to see the white-tailed sea eagles, red and black kites and ravens in many places; and noteworthy that beavers and otters also prevail in this area. And the overwhelming concert of frogs and toads will surprise you when the weather conditions are favourable!

During this tour we will stay overnight in accommodation situated in a little village with half-timbered houses at the foot of a hill in walking distance of the river Elbe. The accommodation is atmospheric and you will have a view of the flood plains of the Elbe with red-backed shrikes, whinchats and nightingales. Cranes also breed very nearby and they often forage in the flood plains. Sometimes we see the white-tailed sea eagle passing by during breakfast. On sandy spots along the Elbe dyke very unusual plants grow such as madam trip, pansy, English grass and sky key, yellow bedstraw and meadow crown. In the evenings you will hear the barn owl from the old lime trees next to the guesthouse and you will also hear the distant sound of a huge chorus of tree frogs. A stone marten lives in an old shed in the village.

Ebony is a natural hard wood alluvial forest on the banks of the river. The forest is beautiful, particularly in the great number of old and huge oak trees (some inhabited by the very rare oak beetle) which abound there.

The variety of trees and shrubs is remarkable: oaks, black poplar, leaved lime, Wych elm, sycamore, field maple, midland hawthorn, blackthorn, hazel and yellow dogwood. The ebony area is also a breeding ground for cranes, black storks, red kites, pied flycatcher, wood warbler and the golden oriole. In the extensive landscape along the Elbe river we have a good chance of seeing ortolan, bunting and partridges. Furthermore we may also see the barred warbler in the hedgerows and on the flood plains. We will visit the Grenzland reservation, situated by the former border with Eastern Germany. In the vast reeds live marsh harrier, little bittern, bittern, great warbler, bearded reedling and penduline tit. Near the former border area, part of the fence with barbed wire and mines remains; only the guards and dogs are missing. 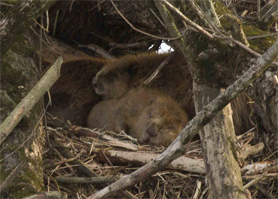 The Elbe area is rich area in amphibians and is a special site for fire-bellied toads, which is found here in its most western habitat along the banks of the river Elbe. The fire-bellied toads are mostly only found in ponds (Qualmgewässer) where the water level varies because of the porous dikes, and they can only be heard (oenk, oenk) when the water level is rising. On our evening excursions we will hear the green frog, tree frog, natterjack toad and the nightingale.

The Nemitzerheide is a large undulating heathland, partially developed after a heathfire in 1975. On the heath a large flock of sheep graze. We will enjoy our walk on the heath and we will search for the tawny pipit, a species which is extinct in all the surrounding countries, although several pairs breed here. Even here, though, numbers are dwindling, presumably because open sandy spots are dimishing too. In the evening we will return to this area to look for nightjars.

Red kites along the Elbe 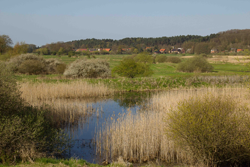 We will take a trip along the windy Elbe-dyke on the former East German bank of the river. where time seems to have stood still. We will see old half-timbered houses with nests of storks, crooked old oaks and stately old elms. Black and red kites fly over the farmhouses. From the ponds on the flood plains green frogs and fire-bellied toads call. Very special to this area is the ortolan bunting, which is usually easy to find. In the thicket we may also find the river warbler with its noise that sounds like a sewing machine!

On one day we will take a trip to the Havelländisches Luch which is the top location for watching courting great bustards. In this area we also have a chance of seeing red and black kite, Montagu’s harrier, quail, corncrake and great grey shrike.