Bird tour in the amazing and impressive country with that special culture, with a highlight of observing black-necked cranes This tour takes place in December, when it will be easier to see the white-bellied heron and mammals like golden langur and grey-capped langur. Immediately good when entering the country

At arrival in the Himalayan Kingdom of Bhutan you are wondering on the pristine forests stretching to the horizon and the variety of tame birds, the snowcapped mountains, the peaceful landscape and the beautiful Dzongs. Just in front of our hotel, from the bridge acros the Paro river, we saw something moving, something that looked like moving stones, but what we saw was the ibisbill and so nearby! We have been looking for the ibisbill in Nepal and India for longtime, but we found the ibisbill in Bhutan.

Bhutan, the mountain kingdom in the eastern Himalayans is a bird paradise. Most famous for the cultural treasures and lifestyle, you should nearly forget the impressive significance of nature. Vast protected areas in combination with a respectful handling of all living creature has made it a shangri la for birds and their watchers

How much a birdwatcher you are, you will not take home only the very long list of species you see in Bhutan, but also the unforgettable memories of this country with its friendly and optimistic population. Our Bhutanese guides will give you an inside view of the country and let you see and record all the birds possible. Most of Bhutan are high mountains up to 7700 meters. From the highest places to the the subtropical southern plains you find a variety of habitats and their feathered inhabitants. The birds of the highes place are hardly to find in the summer, because their living places are inaccesible. These birds come to lower areas in Winter. However, these places are between 3000 and 4000 meters. So in Winter time you will find most accentors (3 species), a much wanted species like fire-tailed myzornis. It is much easier to see Himalayan monal, blood pheasant, snow pigeon and golden eagle. Many birds are in large flocks, composed of up to ten species with leading sultan tits and cutias, other tits, several warbler species, minlas, yuhinas and fulvettas. Bhutan is situated in the eastern Himalaya, one of the most important

biodiversity-hotspots on earth. In the present situation roughly 70% of the country is forested – largely pristine – and 25% protected in National Parks and reserves. This makes it a heaven not only for birds but also for a rich diversity of plants, among which many rhododendron and orchid species, mammals and insectsTo keep this all safe for the future the government of Bhutan had strictly regulated acces to the kingdom. 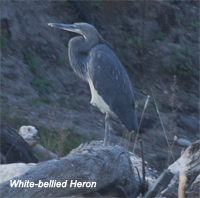 We will see birds everywhere. Arriving in Paro you will drive along the river and within 10 or 20 minutes you may have your first ibisbill, grey shrike, plumbeous redstart and brown dipper. With a bit luck you will see a white-capped redstart the same day. During my first visit I was reaching my hotel after two hours and could enjoy a wallcreeper, creeping against the wall of my room. Going higher to Chele La the pheasants are target species to see, like some redstarts and others. After having seen them following the rivers will bring us the birds we already mentioned and forktails along forested and stony riverbeds. Sometimes otters come in the picture and always there are surprises of raptors drinking near the river, crested kingfisher and Pallas’s sea eagle, the latter mostly closer to broader river then to smaller ones. Many places near rivers have large numbers of wintering ruddy shelducks, but only one place, near Punakha is known for the elusive super-rare white-bellied heron. We will try to find it. In the forests we will find many wintering birds, as said above in flocks, like Ward’s trogon, sultan tit, rufousnecked hornbill, satyr tragopan, white-browed bush robin, Russet sparrow, beautiful nuthatch, beautiful rosefinch, red-tailed Minla, spotted wren babbler, many species of laughingthrush, great parrotbill, brown parrotbill, black-throated parrotbill, collared grosbeak, crimson-browed finch.

The landscapes are fantastic, not only the gorgeous natural landscapes but also the agricultural areas with the cattle, grasslands and the fiels of the cereals, where sneaky Assamese macaques take their share of the harvest.

East Bhutan is situated at high level with steep slopes and intimating forests. Bird watching is only possible from the road and paths but we will not miss to see birds of prey and owls and the black eagle, the mountain

hawk eagle and the asian barred owlet as well. The many yuhina’s, fulvetta’s, warblers, scimitar babbers, laughingh-thrushes, barwings, babblers and minla’s. In some areas, we mention Shemgang and far eastwards, we cannot miss the beautiful nuthatch, just like cutia and several woodpeckers, great spiderhunter, finches and grossbeaks. Along the steep slopes of the rocks we will see bees nests. No doubt you will find there yellow-rumped honeyguide and blue-bearded bee-eater.