Amazing and impressive country with plenty birds, nature and culture

The document below is the list of the species we found during the tour of April-May 2012. bhutan-waarnemingen2012

At arrival in the Himalayan Kingdom of Bhutan you are wondering on the pristine forests stretching to the horizon and the variety of tame birds, the snowcapped mountains, the peaceful landscape and the beautiful Dzongs. Just in front of our hotel, from the bridge acros the Paro river, we saw something moving, something that looked like moving stones, but what we saw was the ibisbill and so nearby! We have been looking for the ibisbill in Nepal and India for longtime, but we found the ibisbill in Bhutan.

Bhutan
It is unbelievable that a country, the size of The Netherlands, exists with nearly 700 species of birds and a much higher number of insects, flowering plants. An absolute hotspot of biodiversity. Bhutan has kept traditional ideas of development and prosperity at arms’ length, and instead has remained faithful to the tenets of Tibetan Buddhism, whereby hunting is forbidden and vast areas of wilderness are kept just as they are.
The focus of our Bhutan tours is birdwatching as often and as much as possible. The very special culture will be like an amazing bonus: beautiful sceneries, landscapes, dzongs, monasteries. The most famous of them Taktshang or Tiger’s Nest can be visited in most of the tours, by a hike.

A Spring tour and a Winter tour Both follow the same itineraries. In Spring you will enjoy the breeding season, and summerbirds like cuckoos and bee-eaters and abundant flowering. In winter you will meet the migrants from the north like Upland Buzzard and high elevation birds like Fire-tailed Myzornis, Wallcreeper and the birds occur more in flocks. Also the rare White-bellied Heron is more sure to be seen, until now every time. Most of the Bhutan species are very good to spot in both tours.

We will travel the famous Lingmethang-road, the richest bird area of Asia. Most spectacular are here the Satyr Tragopan, Wedge-billed Wren Babbler, the Ward`s Trogon and the beautiful Rufous-necked Hornbill. In these silent and pristine surroundings we will stay for four nights in tented lodges.

Birds
Himalayan Monal, Blood Pheasant, Satyr Tragopan and the Kalij Pheasant are among the hightlights of the mountains. White- bellied Heron, Pallas’s Fish Eagle, Crested Kingfisher, five species of Forktail and many more species along streams and rivers.

So what is it about Bhutan that has made everybody so very enthusiastic? Well there are plenty of bird species – nearly 700 have been recorded – but there is no place in the world with a similar diversity. It is Bhutan’s almost unique pristine state and gentle atmoshere that make a visit here so inspiring. This country has kept traditional ideas of development and prosperity at arms’ length, and instead has remained faithful to the tenets of Tibetan Buddhism, whereby hunting is forbidden and vast areas of wilderness are kept just as the are. And nowadays Bhutan has recognized that its own land is a priceless treasure, especially in its preserved state: “the Gross National Happiness”. In this outstanding landscape, the mountains reach the dazzling heights of 7.700 m (the loftiest mountain Gangkhar Puensum, is the highest unclimbed mountain in the world.

Bhutan is one of the most important biodiversity hotspots on earth, because of the high mountains and the steep slopes and valleys rushing rivers and tall forests. Owing to the high rainfall, resulting from the monsoons, that come up from the Bay of Bengal, the tree line is at an exceptionally high elevation, – 4000 m, one of the highest in the world – and this enables a high density of species even at this extreme altitude. The diversity is more diverse as you go from west to east and that is the way we will go. 40% of the country is National Park and 70% of the country is covered with forests.

We see birds everywhere and many and especially the very rare species, such as the birds of the high Himalaya we mention pheasants the Himalayan monal, and the bloodpheasant.

– Kyichu Lhakhang, a sacret place in Bhutan, founded in the 8th century, and one of the oldest Buddistic temples in the Himalayan.

– The magnificent Punakha Dzong, a monastry fortress with the official name: “Punthang Dechen Phodrang Dzong” or “the Palace of the National

Hapiness”. This Dzong was in former days an important fortress to protect the country against Tibetian armies. This Dzong is still the winter accommodation and the religious capital of the monasty community of Bhutan.

The scenery is marbelous, in the country with the beautiful Bhutanese farmhouses, the agricultural areas and the overwhelming nature as well.

The splendid Phobjikha valley, surrounded by rhododendron, blue pine trees and bamboos. This is an old glacier valley, at a height of 3000 m, where you see moors, forests and agricultural areas, with architectonical specialities as the charactaristic farmhouses and the monastery nearby Gangtey Gompa.

Yet more exceptional are the cloud forests in the east Bhutanese region Namling eastward of Yonkala. Here you see in the pristinity and the rughness of the landscape the overwhelming number of animals and plants, which is also for the eastern Himalayes very exceptional. Namling road is considered to be one of the hotspots for birdwatching of South Asia.

In eastern Bhutan we shall be camping in tented lodges. Also for experenced campers this will be a special adventure. The tented lodges are prepared by an expert team. It will be simple, comfortable and fantastic to camp in the middel of the cloudforest, with ephiphytes, ochids growing in the trees, the many big and smaller mammals and the unsurpassed richness in bird

It is very impressive hiking the mighty forests of the Thrumsing La National Park, situated round the highest top or our tour. Gradually you are going up from 3500 m until 3900 m. We go down to a height of 3100 m. Especially in Spring this park is a party of rich flowering rhododendrons and magnolias. Here we are in the special habitat in the high mountains of special mammals as the red panda bear, which even as the giant panda, eats the abundant growing bamboos. These animals are very shy and we will need good luck to see them.

After leaving the campsite near Ura we will drive higher and higher to the pass and the highest top during this tour Thrumsing La at 4000 m. Also at this height we see subalpine forests, which are different from the European forests, and have the typical under growth of bamboos, rododendrons, magnolias and many flowering herbs and rimula and begonia as well.

During our tour we will be guided by a very experienced Bhutanese expert in bird watching, Chubzang Tangbi. 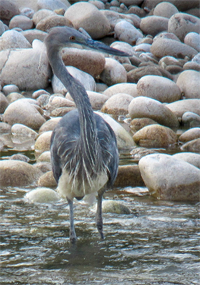 west to the central part of Bhutan. Here we will see the species of the rushing rivers. White-capped redstart en plumbeous redstart, the brown dipper and of course the ibissbill, here so common. Climbing the Chele La pass we will explore the area for the Himalayan monal, the bloodpheasant and the snow doves. High in the mountains we can observe the most beautiful fire-tailed Myzornis. Rododendrons are full of mrs gould’s and green-tailed sunbirds. Along the road in Chele La (3780 m) we have a good chance to see the species of alpine areas. Very special is the collared grosbeak

Along the Puna Tsang Chu (=river) we expect to see the crested kingfisher and many waders, which use the valleys as migrating area back to the northern breeding areas. The ultimate in birding will be the Pallas’s fish eagle and the very rare white-bellied heron. (latter species will be best to watch near Punakha). From Trongsa we travel to the east along the Lingmethang road, the richest bird area of Asia. Most spectacular high lights are the satyr tragopan, wedge-billed wren babbler, de ward`s trogon and the most beautiful rufous-necked hornbill. In this silent and pristine surroundings we will stay for four nights in tented lodges.

East Bhutan is situated at high level with steep slopes and intimating forests. Bird watching is only possible from the road and paths but we will not miss to see birds of prey and owls and the black eagle, the mountain hawk eagle and the asian barred owlet as well. The many yuhina’s, fulvetta’s, warblers, scimitar babbers, laughingh-thrushes, barwings, babblers and minla’s. In some areas, we mention Shemgang and far eastwards, we cannot miss the beautiful nuthatch, just like cutia and several woodpeckers, great spiderhunter, finches and grossbeaks. Along the steep slopes of the rocks we will see bees nests. No doubt you will find there yellow-rumped honeyguide and blue-bearded bee-eater.

On the map are shown the locations of the tour