Bhutan is great for bird watching. You can go from west to east and meet all the biotopes of Bhutan and see more than 300 species in  two weeks. 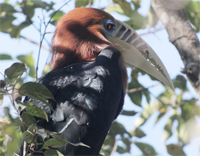 Close to the Indian border you are on lowland level, where the climate and temperatures are subtropical. Here are fabulous pristine forests, floodplains, riverine forests and wetlands. There is an abundance of birds and mammals, including all the big cats, rhino and elephant, in short this is Manas.

Day 1. Delhi – Paro. This morning we fly by Druk Air to Paro, Bhutan, where we should have good views of the Himalayas, including many of the highest mountains in the world. After checking into our hotel and having lunch we will begin with a walk along the river to look for Ibisbill, River Lapwing, Indian Roller, Rock Pigeon, Oriental Turtle-dove, Olive-backed and Rosy Pipits, Black Bulbul, Long-tailed Minivet, White-capped and Plumbeous Redstarts, White-browed Fulvetta, Long-tailed and Grey-backed Shrikes, Yellow-breasted Greenfinch and Russet Sparrow.
NIGHT: Hotel Paro (2400m).

Day 2. Paro – Chele la – Paro (75km). We depart early for our journey up through ancient pine and fir forests to Chele La Pass (3780 m), where there are fantastic views of the high Himalayan peaks of Jhomolhari (7219m), Jichu Drake (6989m) and down into the Paro and Ha valleys. Above the tree line we will look for Lammergeier, Hill Partridge, Blood and Kalij Pheasant; Large Hawk-cuckoo, Rufous-bellied Woodpecker, Alpine Accentor, White-collared Blackbird, Dark-throated Thrush, White-throated Redstart, Black-faced Laughingthrush, Streak-breasted Scimitar-babbler, Chestnut-tailed Minla, Green-backed Tit, Fire-tailed Sunbird, Yellow-billed Blue Magpie, Yellow-browed Tit and White-browed Rosefinch. After a hot breakfast we will continue birding in this beautiful area before gradually making our way back to Paro and on to Thimphu. We will stop near Shaba to look for Wallcreeper. In Thimphu we will visit the sewage treatment plant where there will be a wide variety of birds including Ruddy Shelduck, Ferruginous Duck, Blue Whistling-thrush, Little Bunting, Black-tailed Crake and Brown Dipper.
NIGHT: Hotel Paro (2400m)

Day 3. Paro – Punakha (123km). This morning we will drive to the Dochu La Pass (3200 m) in time to see the incredible sunrise over the High Himalayas, where prayer flags line the road carrying their messages to all sentient beings. Here we will also be on the lookout forGreat Barbet, Rufous-breasted and Maroon Accentors; White-browed Shortwing, Ashy-throated and Whistler’s Warblers; Verditer and Ferruginous Flycatchers; Grey-headed Canary-flycatcher, Blue-fronted Redstart, Striated Laughingthrush, Rufous Sibia, Fire-tailed Myzornis, Rusty-flanked Treecreeper, Fire-capped Tit, Green-tailed Sunbird, Fire-breasted Flowerpecker, Dark-rumped Rosefinch and Large-billed Crow.
We will breakfast here and then bird through the broad-leafed forest where we should encounter with the rareWard’s Trogon as well as Crimson-breasted Woodpecker, Large Niltava, Grey Bushchat, Yellow-bellied Fantail, Hoary-throated Barwing, Maroon Oriole and Grey Treepie.                                                 Our descent passes through sub-tropical forests before reaching the terraced paddy fields of Punakha. It is here, on a promontory above the confluence of the Mo chhu (female) and Pho chhu (male) we can see the majestic Punakha Dzong. In this relatively open habitat along the newly formed Puna Tsang chhu, we will stop and bird hoping to see the Rusty-cheeked Scimitar-babbler, Slender-billed Orioleand Richard’s Pipit and hopefully the globally threatened White-bellied Heron.
NIGHT: hotel Punakha (1600m).

The day begins with another scenic drive along winding mountain roads, climbing through oak and rhododendron forests to the high pass that drops down to the wet-lands of Phobjikha Valley. This one of the few glaciated valleys in Bhutan and an extremely important wildlife preserve. It is home to the rare and endangered Black-necked Cranes who migrate from the Tibetan plateau to winter here between October/November and March.

Situated on the western slopes of the Black Mountains, bordering the Jigme Singye Wangchuck National, covering an area of approximately 163 square kilometres (63 sq ml), Phobjikha is a protected area, managed by the Royal Society for the Protection of Nature (RSPN). It is extremely rich in faunal biodiversity and, apart from the globally threatened Black-necked Cranes, at least 13 other globally threatened species can be found within its boundaries. Near the foot of the valley, WWF has assisted in setting up the Khebethang Nature Study Centre.

Day 5. Phobjikha – Trongsa (75km). A final few hours to watch the cranes in their feeding grounds, before we continue our journey east to Trongsa. This part of our journey takes us across the western slopes of the Back Mountain National Park, climbing through mixed forests of rhododendrons and magnolias before arriving at Pele La Pass (3,300m), with magnificent views across to snow topped Jhomolhari (7,314m), marking the border between central and western Bhutan. Our descent through thickets of dwarf bamboo where brilliant Spotted Laughingthrush, White-browed Rosefinch, Rufous-vented, Whiskered and Stripe-throated Yuhinas; and Yellowish-bellied Bush Warbler can be seen with Hen Harriers frequently seen riding the thermals above.Now our descent takes us into the heart of central Bhutan’s Black Mountain region travelling through more pristine, mixed broad-leafed and evergreen forests with dense bamboo undergrowth. We will stop for birding and photography throughout this part of the route and at the village of Chendibji with its Nepalese styled Chorten, picturesquely situated alongside the river where we may encounter: Brown Dipper, White-capped Water Redstart, Bhutan Laughingthrush and Gold-billed Magpie. We will continue our journey to Trongsa, stopping briefly at the stunning view point of Trongsa Dzong.
NIGHT: hotel Trongsa, (2200m)

Day 8: Tingtibi to Gomphu (46km), birding en route. Tingtibi is the junction of Royal Manas Park and Jigme Singye Wangchuck National Park. Situated at the northern most tip of the Royal Manas Park it receives the heaviest rainfall in the country, resulting in the area being a thriving sub-tropical ecosystem which provides a haven for wildlife. Today will have an early start for birding around the campsite and after breakfast driving the 46 KM drive to Gomphu, stopping along the way in prime areas for excellent bird watching.

This is the beginning of Royal Manas National Park and the Bhutanese section of the Natural World Heritage Site of the Greater Manas Tiger Reserve. It is divided by the Manas River from Assam, India and is renown as an area of great bio-diversity. Within its boundaries it is possible to see up to 59 of the recorded species of mammals; 13 of which are totally protected. It is the only park where it is possible to see all of Asia’s ‘Big Five’: Asian Elephant, Asian Water Buffalo, One-horned Rhinoceros, Leopard and the Bengal Tiger as well as other rare species such as Golden Cat, Gaur, Sloth Bear, Binturong (Asian Bearcat), Himalayan Black Bear, the Assamese Macaque and three rare primates: the Golden, Grey and Capped Langurs. Manas provides the perfect habitat for orchids, as well as in excess of 900 species of vascular plants. It provides the perfect habitat for over 400 different bird species – 427 recorded during 2006 and 5 more in recent years, totalling 432. These include the rare Bengal Florican, Great Hornbill, Crested Serpent Eagle and the most recently recorded Malay Night Heron and Black Baza. Birding in these subtropical forests with their thick undergrowth of bamboo we should also find: Blue-throated and Golden-throated Barbets, Rufous-necked Hornbills, Himalayan, Ashy, White-throated and Black-crested Bulbuls, Emerald Dove, Grey-capped Pygmy, Pale-headed (rare) and Fulvous-breasted Woodpeckers, Red Junglefowl, Spotted and Eye-browed (rare) Wren babblers, Red-faced Liocichla, Yellow-vented and Rufous-faced warblers.
We continue to our Eco Communities Campsite – an enterprise which enables local villagers to participate in the Park’s conservation activities and management schemes; which also aims to raise the standards of living through community tourism programmes.
NIGHT: Camping at Gomphu (1,409m).

Day 9: Gomphu to Panthang, 28km. We continue our descent to Panthang which lies in a beautiful valley of the Mangde Chhu and our campsite overlooking the river at Pantang.
The whole 28km stretch is a prime birding area where we will stop and walk in this excellent location for birds, butterflies and orchids. The first 15 km stretch is dense broadleaved forest birding where we should find; Scaly-breasted Munia, Plaintive Cuckoo, Asian Emerald Cuckoo, Blue-throated Flycatcher, Blue-bearded Bee-eater, and Streaked Spiderhunter.
On reaching Ridibi we have the impressive confluence of the Chamkhar Chhu and Mangde Chhu, forming the Manas Chhu which we will follow to our campsite at Pantang. Around the campsite we should fine; big groups of Great Hornbill, Golden-fronted Leafbird, Striated and Rufescent Prinias, Oriental Magpie Robin and Blue-throated Barbet.
NIGHT: Camping at Panthang (240m).

Day 10: Pantang to Panbang, 25km.
Today birding is along the Mangde Chhu, from Pantang to Panbang. The early part of the drive passes through is thick bamboo forest were we should find; White-throated, Black-crested and Ashy bulbuls, Rufous-necked Laughingthrush, Common Tailorbird, Broad-billed Warbler, Rusty-cheeked Scimitar Babbler, and Common Green Magpie. In this area of pristine beauty, we also hope to spot one of the species of Langur, Jungle Cats or Barking Deer and birds such as: Orange-headed Thrush, Bronzed, Lesser Racket-tailed and Hair-crested Drongos, Chestnut-breasted Partridge, Grey Peacock Pheasant (rare), Rufous Treepie, Blue-eared and Coppersmith Barbets, Rufous-bellied Mountain Hawk, Crested Serpent Eagle and Red Jungle Fowl. Just before our campsite at Panbang, there is a wonderful waterfall where we will stop for photos and more birding. A day of remarkable sights and sounds and you will be amongst the first tourists to venture into this remote wilderness, where ancient traditions are being encouraged to engage concepts from the 21st century, in order to protect the land and all its inhabitants.
NIGHT: Camping at Panbang, (320m).

Days 11 & 12: Panbang and Manas National Park; with elephant treks and rafting excursions as optional extras. These two days allow time to explore this unique World Heritage Site and one of the oldest protected areas in Bhutan. Manas National Park has an area of 1,059 sq. km and is now linked to the Jigme Singye Wangchuck National Park to the north, India’s Manas Tiger Reserve in the south as well as Phibsoo Wildlife Sanctuary and Thrumshing La National Park through biological corridors; providing a continuous gradation of protected, natural habitats from the tropical lowlands up to the High Himalayas.

Over 90% of the park area is under forest cover including vast areas of tropical and sub-tropical monsoon forests, interspersed with expanses of natural grasslands and wide riverbeds; promoting the wide variety of wild-life found within its borders.

Each night we will set a camera trap hoping to catch one of the park’s rare and endangered species. With 8 different species of cats and the largest recorded tiger density in the world, we will certainly do our best to capture an image of one!
On these two days we will bird the route from our camp to the park office at Manas (13km), where we will look for: Oriental Dwarf and Ruddy kingfishers, Puff-throated, and Stripe Tit babblers, Red-breasted Parakeet, Indian Roller, Asian Fairy Bluebird, Dollarbird, White-rumped Shama, Citrine Wagtail, Chestnut-headed Bee-eater, Hill Myna, Wreathed, Oriental Pied, Rufous- necked (rare) and Great hornbills, Hooded Pitta (rare), Silver-breasted Broadbill (rare) amongst the many that frequent this ancient landscape.
NIGHT: Camping at Panbang x 2, (320m)
Day 14: Guwahati – Delhi for onward connection. Today you will drive to Guwahati International Airport for your connection to Delhi. 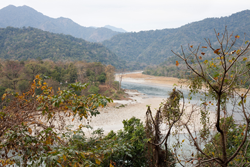 From the 9th Day it is possible to do part of the tour by  trekkings.

At night we stay in comfortable tents; there is no better way to explore birdlife and mammals. The chances are better because they are less shy than elsewhere.

watch the short movie about Manas national park in Bhutan: